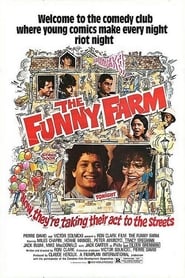 Trailer
The laughs are nonstop as a gang of ambitious young comics strives to make it in the exciting world of stand-up comedy at the famous comedy club in L.A., The Funny Farm. These budding comedy stars are as crazy offstage as they are on: Miguel, America s funniest illegal alien ; Miles, who can t decide if he s a black comic or a comic who happens to be black; Bruce, whose manic act borders on insanity; and Peter, the intense political satirist. The Funny Farm is a hilarious and insightful look into those who live the lives of comedians. Starring comedy superstar Howie Mandel (Walk Like a Man, Deal or No Deal, America s Got Talent), game show legend Jack Carter (The Hollywood Squares, Match Game) and the great Eileen Brennan (Private Benjamin).

George Carlin: Back in Town

Back in Town is George Carlin's ninth HBO special. It was also released on CD on September 17, 1996. This was also his first of many performances at the

Dave gets his own HBO special, filmed in San Francisco

A bootloeg of Bill's SECOND to last live performance at Igby's Comedy Club in LA on January 5, 1994.

George Carlin: Playin' with Your Head

George Carlin is in top form with these stand-up recorded at the Beverly Theater in Los Angeles in 1986. Routines included are "Losing Things,"

George Carlin: What Am I Doing in New Jersey?

George Carlin changes his act by bringing politics into the act, but also talks about the People he can do without, Keeping People Alert, and Cars and